US History Expectations for Homework, Studying, and Writing

As a middle school teacher, it is very important to help develop students to become better learners.  In order to help this process, expectations need to be clear.  The worksheet below provides some basic ground rules for students.

Social studies in eighth grade continues the story of the formation of the United States that you started last year.  We begin the year by studying Civics that include topics such as the Constitution, the role of citizens in our republic, and recent elections.  In the second quarter, we return to studying American history by analyzing the causes of the Civil War.  After studying the Civil War and Reconstruction, we study the important themes including industrialization, immigration, urbanization, technology, and expansion.  When we study these themes, we look at how Americans dealt with them during the 19th Century but also look at how these themes relate to us today.

2 Categories that are subdivided by points within the categories...
15% Classwork/Homework (10 points for each assignment)
85% Assessments (point values listed below)
Tests 100-200 points
Projects 100-200 points
Quizzes 20-50 points

I will be available before and after school on certain days of the week.  Extra help is most important on days before a test or for group work on a project.   Students need to sign up for a study session in advance.

(Sign ups will be for appoints mostly likely on Tuesday or Thursday depending on my schedule.) 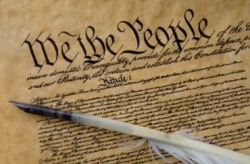 United States Constitution
Students will learn about the duties, responsibilities and rights of being an American citizen.  They will also study various forms of governments and evaluate the benefits and negatives of those governments in the world today.  Students will learn about our  republican form of government and the role that this government has on the lives of Americans.  Students will complete various projects that help them understand the Constitution and the Bill of Rights.  At the end of the course of study, students will take the citizen's test that is given to immigrants who seek to become naturalized American citizens. 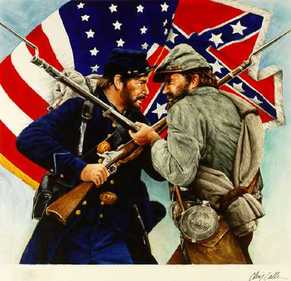 Union v. Confederacy
Toward the Civil War (Chapter 1)
Students will review and analyze the issues leading up to the Civil War.  Students will write a multi-paragraph essay that analyzes the most important events that led our nation to war. 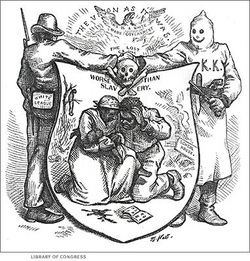 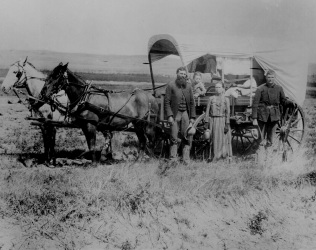 Family moving to the West.
Opening the West (Chapter 4)Students will study the expansion of Americans across the North American continent.  Many different groups competed for the natural resources including miners, farmers, and cowboys.  Native American tribes resisted the American expansion but their efforts failed and most of the tribes were forced into a reservation system.  Students will take part in a lobbyist hearing in Congress to advocate why the group they represent should get the land. 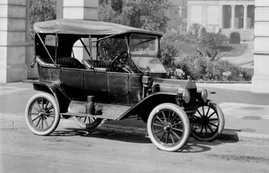 Henry Ford's Model T
The Industrial Age (Chapter 5)
Students will learn how inventions and new business practices changed America from a nation of farmers to an industrial giant.  Important inventions such as the light bulb and the discovery of oil will assist in this transformation.  Students will write an essay debating whether the leading industrialists such as Andrew Carnegie are "Captains of Industry" who built an industrial economy or "Robber Barons" who exploited their workers.  If all goes well, we will take a field trip in the Spring to one of the Newport Mansions that exemplify the  wealth of that era.